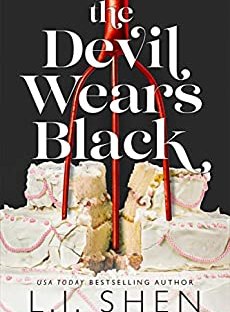 Maddie Goldbloom stitched up a plan to ensure everything in her life was perfect—from a career in fashion to a chic NYC apartment to a pediatrician boyfriend.

When her ex, Chase Black, storms back into her life with an outrageous request, her immediate reaction is to refuse him. But he only wants to fulfill his father’s last wish. So even though he’s the man who broke her heart, playing his fiancée shouldn’t be hard, especially if it means she gets to watch the arrogant devil squirm a bit.

What ensues is a chain of events that detonates Maddie’s life—and when Chase’s walls come down, they both are forced to face reality.

They say keep your enemies close. But what if your enemy is also the man you love?

As a big fan of LJ Shen, I was eagerly awaiting this release but didn’t love this like so many she’s given us before. Chase, for all of his faults, is a likable enough character but Maddie’s not my favorite. I have a love/hate relationship with many of Shen’s male leads but usually love her women so maybe I’m being unfair to Maddie simply because she’s no Jesse or Prescott.

After all, they can’t all be Darias or Sailors, but I think I’m being fair. Maddie is so over-the-top “not like other girls” that I expected her to begin playing a ukulele at any moment.

She has an untrained dog that I pitied and was dating a man she didn’t even like but wouldn’t break up with for reasons that are never really clear except general angst. That’s not to say I didn’t like her at all, she had her moments and I empathized at points. I certainly didn’t hate her but she’s a complete letdown after Shen’s impressive track record of confident, badass women.

There was lots of banter, which I normally love, but it felt out of place because it was the only way they seemed to interact for most of the book. It was definitely a missed opportunity because the story or characters would’ve had so much more depth if only they’d talk to each other instead of texting something then deleting it before the other can see it. Even a total inability to communicate is useful when characters reflect on it to any degree, but these two seemed completely satisfied with the state of things and that’s disappointing.

The story was engaging enough to hold my interest and wasn’t completely predictable, although I couldn’t root for the couple as I normally do. There were moments where I could only think that Chase could do so much better and the ending left me wondering if I missed a chapter or two because it felt like some of the story was missing. It wasn’t a didn’t finish and I didn’t hate it but if you’re new to LJ Shen, skip over this for now.

Newbies should start with the Sinners of Saint or All Saints High series for her best work. Bane, Angry God and Pretty Reckless in particular are some of my absolute favorites and highly recommended. If you’re already a fan, give it a shot because you may love it, lots of readers do.

The Devil wears Black on Amazon.