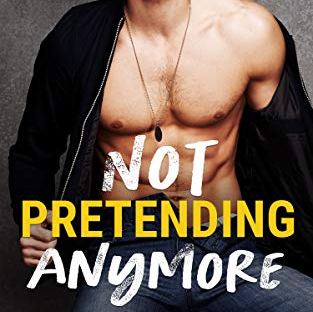 Finding a good roommate through a classified ad isn’t as easy as it sounds.

I was starting to lose hope.

Until a knock at my door came and God answered my prayers.

I’d definitely requested the big guy find me a drop-dead gorgeous man on more than one occasion…just not as my roommate.

Declan Tate talked me into interviewing him anyway.

While he was amusing and charismatic, I wouldn’t have been comfortable living with a man, so I regretfully declined.

Then cupcakes showed up at my door—freshly baked by Declan and just as sinfully delicious as he was.

You could say he was persistent.

I eventually folded. It wasn’t like I had another viable candidate anyway.

Plus, I was interested in someone else. And Declan was into another woman. So it wasn’t like anything would happen romantically.

After he moved in, the two of us became the best of friends. We even started to give each other advice on getting our crushes to notice us.

Eventually, Declan concocted an idea: we should pretend to be a couple to make our love interests jealous.

I was hesitant, but went along with it anyway. To my utter shock, his crazy plan worked.

Now I was dating the supposed man of my dreams, and my best friend had the woman of his.

But there was one problem.

I couldn’t stop thinking about Declan.

Those feelings we were trying to fake?

This is a feel-good read and was just the kind of calm I needed waiting for Let Me Love You to release. Molly is a sweet girl with a crush on a coworker who needs a new roommate. She only wants a female roomie but Declan is desperate for a short-term lease and wears her down with cupcakes. The two quickly become fast friends devise a plan to fake dating to make their respective crushes jealous. The plan works a little too well though and they’re both floundering.

Declan and Molly are great together so the slow-burn aspect of this story is slightly frustrating because how can they not see what I’m seeing? But if all the realizations came immediately, there wouldn’t be any story. There’s definitely an attraction on both sides but they each have their own reservations. Declan’s time in Chicago is limited and Molly has crushed on Will forever so she’s determined to take the easy route and date her colleague. He’s not going anywhere and Will is everything she’s ever wanted. Except he’s not Declan.

For his part, Declan knows Molly is the right woman for him but he has issues and doesn’t want to be a burden to her so he’s not going to let anything happen. Except he’s miserable without her and seeing her with Will kills something inside of him.

“You know you’re in love if every little thing you’ve ever been scared of suddenly doesn’t seem half as terrifying as not spending the rest of your life with that person.”

There’s emotion in this story and some heavy topics but it’s still a romantic comedy at heart and a lol funny one at that. Declan in particular is hilarious and his POV adds so much to the story, especially when it comes to his inner monologue regarding Will. This is a fun story with loveable characters who are easy to root for and I highly recommend it.

Not Pretending Anymore on Amazon.