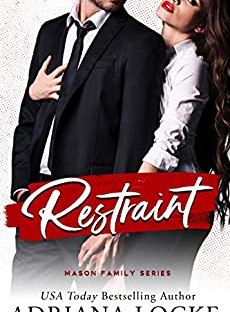 Restraint is a standalone romance with heart and heat from USA Today Bestselling author Adriana Locke. Join readers everywhere as they fall in love with the delicious Mason brothers.

Blaire Gibson knows better than to have one night stands.

She prides herself on her decision-making skills. It’s the one asset that has never let her down. But even the best thinkers have weaknesses. Hers is a delicious business mogul with a quick tongue.
Unfortunately for her, that tongue is good for more than just talking.

Holt Mason doesn’t need to justify anything to anyone.

He wants Blaire. He pursues Blaire. And he gets Blaire because that’s how his life works.
Until it doesn’t.

What begins as a single night in a hotel room spirals into an unusual agreement. As late nights provide the space to trade secrets and walls come tumbling down, more is shared than just pillow talk.

They both should’ve known better. They should’ve shown restraint. Because when guards are dropped, hearts get shattered.

Author’s Note: Restraint originally appeared as a short story. Due to reader demand, it has been expanded into a full novel.

I wasn’t sure if I was going to like this book at first. Holt Mason is damn uptight and not nearly as much fun as Coy and Boone so I wasn’t immediately taken with him. Blaire Gibson is smart, beautiful and successful but she seemed like a pretentious grump at first. That all quickly changed though, not far into the story. Holt doesn’t know how to relax because he doesn’t think it’s possible so he’s a pretty sympathetic character. He carries the weight of the family’s development business on his shoulders, constantly reminding himself that any mistakes could make the family fortune disappear.

Blaire came off as so cold and condescending at first, but she’s neither. She’s just a very closed-off person who’s been hurt so many times that she’s withdrawn completely and truly doesn’t know how to interact with people. She hasn’t let herself have a friend or a relationship outside of her family ties for years and that’s understandable once you learn her story.

There’s an instant attraction but this is supposed to be a purely casual fling before she leaves Savannah behind to return to Chicago. Before it’s over, they both realize they have feelings but she’s too terrified of the prospect to admit it even to herself. Holt doesn’t believe himself capable of having a successful relationship because of the demands of his job so he makes lots of excuses to himself about how Blaire deserves better. Luckily for him, she overhears a conversation that wasn’t for her ears and explodes on him.

The supporting cast here was crucial because these are two people who may not have had it within them to come to terms with their feelings. In Blaire’s case, her sister-in-law Sienna forces Blaire to confront her emotions for once instead of pretending they don’t exist. She’s been labeled and punished for her feelings in the past so she simply stopped letting herself feel. That’s her defense mechanism and it’s worked just fine until now but everything changed when she met Holt.

She doesn’t want to have these feelings, especially after she hears his conversation with Oliver, but she can’t just turn the off. Blaire is struggling and needs a friend now more than ever, so luckily Sienna Gibson is there to force herself into Blaire’s life. Holt, on the other hand, has to deal with everyone butting into his life. His brothers see all and have no shortage of opinions and advice, plus they all gossip like old ladies at bingo so his mom, Iggy, and cousin Larissa are even in on it. His brothers just want him to get his personal life under control because they can’t afford for Holt to be distracted during a critical phase in the latest project but when things get tough with Blair, Holt’s devastated and they only have his best interests at heart.

I really liked Holt and Blaire’s story. I didn’t expect to at first. It just didn’t grab me from the first page the way Boone and Coy’s stories did. However, that changed before even finishing the first chapter. I had some assumptions about who these characters would be and where the story was going, but Locke had some tricks up her sleeve that made it much more interesting. This was a fun read and I impatiently await the rest of the Mason Boys series.

This is a standalone but if you’re planning to read the whole series, there are spoilers so you may want to start at the beginning and read them in order.