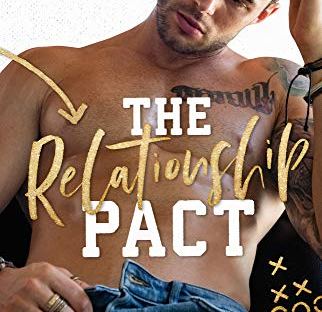 How hard can it be?

That was the question rolling around Larissa Mason’s mind just before she asked Hollis Hudson to be her fake boyfriend. It was only supposed to be for five minutes, after all. Granted, that was also before she felt his hand on the small of her back as he charmed the heck out of her family.

And it was definitely before she saw the football god shirtless. Otherwise, she would’ve had an idea of just how hard some things could be. It turns out that pretending to be in love with a crazily handsome, somewhat enigmatic, and absolutely unforgettable tight end (that has an amazing tight end) is easy.

Reminding herself that just because opposites attract doesn’t mean they’re forever is much harder.

What they have isn’t love—it’s a relationship pact. Right?

Larissa Mason is just trying to enjoy a night out with friends but her sleazy ex won’t leave her alone, even with his new girl present. Desperate to deflect Sebastian, she asks a handsome stranger at the bar to be her fake boyfriend. Locke gives us a fresh twist on the fake relationship with a situation that’s both realistic and reasonable. Larissa chooses the handsome stranger simply because he’s right there as the ex is about to corner her and appears to be alone

Hollis Hudson quickly solves her problem and does it so well, she realizes this fake boyfriend will make her life easier in other ways. He’s exactly what she needs to prevent her well-meaning but misguided mother from setting her up with Sebastian 2.0. Hollis is only in town to receive a charity award and is embarrassed to be there alone, so having a date for the related events would be great. They can help each other out and everyone’s happy.

Their plan works like a charm, maybe even a little too well, because they’re charming one another more with every date. Larissa has sworn off athletes so the sexy tight end should be off-limits but the heat between them can’t be ignored. As things heat up, Larissa tells herself there’s a set expiration date so a fun fling can’t hurt. After all, they’re total strangers and he’s leaving in just days, how much can happen in such a short time? Of course, the answer is A LOT can happen in that time.

This fake couple is on fire but Larissa’s afraid of getting too attached and Hollis, well he just doesn’t get attached because he’s learned the hard way not to count on anyone. They both want to ignore those feelings, but that’s not possible. This was just a silly pact and can’t possibly turn into anything more, can it?

The Relationship Pact is a stand-alone in the Kings of Football trilogy and was the last of the three for me. I happened upon The Revenge Pact by Ilsa Madden-Mills first and rushed immediately into The Romance Pact by Meghan Quinn. Both are excellent books I’ll cover soon but the relevance is that Hollis Hudson was the least interesting of the three men to me, so I wasn’t that excited to read his story. Once I started though, I couldn’t put it down.

Hollis was a character in both of the other books in the series but the other authors didn’t do him justice. He had the most depth and complexity of all the men and was just overall a wonderfully crafted character. One of the things I like most is that these people could be real. As much as I enjoy the billionaires and alphas saving the world, I have a soft spot for fictional people who could actually exist. For me, a realistic character who’s not boring or tedious is the gold standard of excellent writing because there are so many ways our characters can fall flat and not ring true, even tiny ways we may overlook as writers, but the readers will always notice.

Larissa and Hollis are fantastic characters and I’d love to see more of both. Luckily for me, Larissa’s cousins are the brothers of Locke’s Mason Family series so she’s in those books. Sidebar: the Mason Family series thus far is FIRE. I’ll review the first two books in the series soon but want to scream from the rooftops that I’m counting the minutes until the April 8 release of Reckless, Boone Mason’s story. Coy’s my favorite Mason at the moment but Boone’s a close second so I can’t wait to see if he takes the lead.

I found myself rooting for the couple early but also worried my interest would falter because I knew where the story was headed. In fact, it wasn’t predictable at all thanks to well-crafted characters. Larissa and Hollis are both lovable but his fascinating background takes their story to another level entirely. Interaction with friends is a great ways to give readers a deeper look inside the characters’ minds. The secondary characters are engaging as well, which is a huge bonus as I’m clearly a sucker for a series and will see many of them again.

There’s nothing to criticize about these leads or their story. Locke hit it out of the park with Larissa and Hollis. I’m currently making my way through everything else she’s written because Locke is one of my favorites after just a few books.

This is the third book in the Kings of Football trilogy which begins with River Tate’s story in The Revenge Pact by Ilsa Madden-Mills and continues with Crew Smith’s story in The Romantic Pact by Meghan Quinn.

The Relationship Pact on Amazon.

2 thoughts on “Book Review: The Relationship Pact by Adriana Locke”